We’re in the midst of an online boom, and digital payments are following swiftly behind it. While cash becomes a dormant figure of payment’s past, what will be the future for retail?

As e-commerce continues on its upward trajectory, digital payments have become the leading platform for consumers across the country.

PayPal, which is one of the leading payment options for online retail, has experienced a steady level of popularity over the last few years. But as BNPL became increasingly popular in Australia, the options became wider and the competition was apparent. Since the outbreak, there’s been mass uncertainty across the community, with job losses and financial instability.

In March, PayPal has experienced a 17 percent YoY growth, thanks to the e-commerce boom worldwide.

However, in Australia, the popularity of PayPal dipped significantly in April. While many consumers are turning to online retail to complete their shopping, the fear of running into debt has caused some to stop shopping altogether. 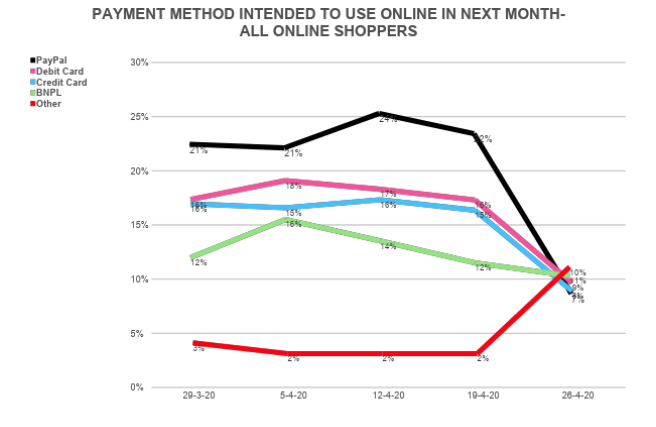 In the month of April, the methods of payment for online shopping shifted significantly. While BNPL remains relatively steady, credit ad debit payments, along with PayPal, have experienced a seismic shift.

Interestingly, there has been an increase in other forms of payments, which include gift cards and store credits.

“Many online shoppers are now running dry, cashing in rewards and gift cards while avoiding credit cards, meaning the next month will be tougher for e-commerce than the mini-boom we have seen in April,” said Grant Arnott, the Managing Director of Power Retail.

In a report from AksjeBloggen, worldwide digital payments are expected to rise on an uninterrupted basis for the next few years, reaching a global value of $6.7 trillion by 2023.

The report also found that 6.1 billion people are expected to use digital payments by 2023 – in 2017, more than 4.1 billion people were fans of the platforms. In 2020, this number has jumped 25 percent, reaching 5.2 billion users.