Consumer Confidence has continued to increase across Australia despite the strict lockdown measures in place, now at the highest it has been since May 30th this year. For six weeks straight, ANZ-Roy Morgan Consumer Confidence has continued to increase and is now up two pts to 97.7. In cities such as Melbourne, Perth and Brisbane, consumer confidence levels are on the rise, the report found.

“Consumers have given a thumbs up to the Budget, with sentiment rising 2.1 percent to its highest level since the last weekend of May,” said David Plank, the ANZ Head of Australian Economics. “This is the second-best post-budget gain in the last six years. There were healthy gains in ‘future finances’ and ‘current’ and ‘future’ economic conditions.” 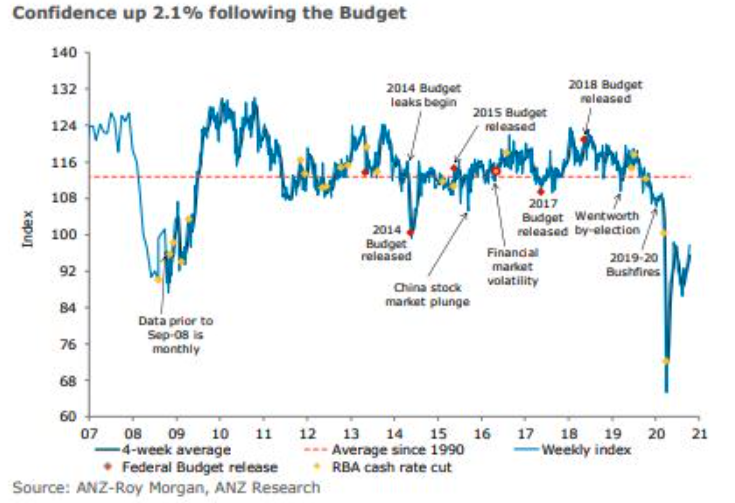 One-in-ten Aussies believe that there will be ‘good times’ for the Australian economy in the next 12 months, with 37 percent say that the country may expect ‘bad times’ regarding the economy’s future.

“Surprisingly, sentiment is weaker in New South Wales, including Sydney, than it is in Melbourne,” Plank explained. “Less surprisingly, confidence is strongest (and above neutral) in Perth. It is also above neutral in Tasmania and South Australia.”