According to Premier Investments, the 27-week period is expected to be in the range of $221 million to $233 million, up between 75 percent and 85 percent compared to 1H20.

“Our greatest priority has been to keep our team, our customers, and the community safe during this once in a century global pandemic, and this will continue to be the case,” explained Solomon Lew, the Chairman of Premier Investments.

“The challenges posed by COVID-19 are the greatest set of risks I have ever seen in more than six decades in retail. During the first half we have had rolling lockdowns and shutdowns in multiple countries all at a moment’s notice.” 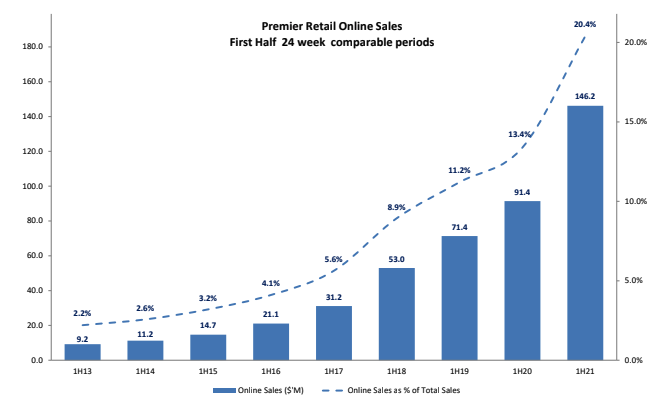 According to Premier Investment’s report, total global sales were up five percent on last year, sitting at $716.9 million.

Furthermore, its online sales have been ‘exceptional’, and remain ‘highly profitable’ for the Group.

Further sales growth for Peter Alexander, Just Jeans and Jays Jays have been reported by the Group across Australia and New Zealand.

“The entire Premier Retail team, led by our CEO Mark McInnes and his outstanding executives, have led the incredible women and men in our stores, our support offices and our distribution centre to deliver for Premier’s customers and shareholders,” Solomon Lew continued.

“Their dedication, skill and commitment are evident in the record-breaking results we have announced today. I have always said the numbers don’t lie, and these numbers prove that the nearly 10,000 strong Premier Retail team is simply the best.”